Raglan's Rhedyn, or Fern as we usually call her, is a Cardigan Welsh Corgi. Her favorite present participles are snuggling, chewing on sticks, following Kirsten wherever she goes, and writing this blog. She hope to be a great poultry herder some day, and also wants to bring joy to the hospital bound by working as a therapy dog.

Kirsten Jensen, as far as this blog is concerned, is Fern's agent, chauffeur, and her biggest fan. She is also Fern's owner. She sometimes leaves Fern at the house "to go teach kids at school," as she says, to which Fern says "Fah!," and Kirsten replies that "the bills must be paid." It would continue in a circular argument this way except Kirsten does not argue with dogs.

One our way down the driveway (we were just starting our walk, you see) I met a snake. He was as bold as a lion for the kind of snake he was, namely a black racer such as has usually disappeared into the palm fronds as soon as they've caught your notice. This creature had great valor, and remained bravely curious, head held high, and body ribboning the grass behind him. My bright eyes met his bright eyes. I took some of his boldness for myself and didn't start or shy as usual but instead took a investigative step forward. He held a moment and then was gone in a blink, leaving just air where his stare had been and the very tip of a tail where all of him used to be. I saw him later that day, once in the garden nearby our first meeting place, and then again and again out of the corner of my eye. No, I only saw him the one more time, come to think of it. The other times it was a stick or a rope, as I realized after leaping sideways in surprise. It is hard to be brave when it might be a twig or it might be a snake.
Posted by Kirsten at 8:08 AM 1 comment:

Remember that ham bone I got months ago which I promptly buried in the yard? No? Well, I do. When I got it it was beautiful, but now it's perfect--seasoned by time and dirt. It has re-emerged from a hidden place like a butterfly out of its chrysalis. Would you like it? Ha! It's mine. You may watch me gloat.

Fern
Posted by Kirsten at 3:15 PM No comments:

As stated in my contract which I signed in paw print before coming to live with Kirsten, one of my jobs is to be a watchdog. You can imagine I take this responsibility seriously. I suspect there are others out there who have a similar position in their household. Many of you, my fellows in letting off the timely warning bark, hope like I do to be the best one can be at this job. The following is the code I seek to follow everyday.

A honourable salute to all those who serve with me in homes of their own. Bark with pride, and know that you do not bark alone.

How to Steal the Best Chewy

Most are not as adept at acquiring the very best of the chew toys as I am. I feel safe letting my compassion show through at this point, because I know even with help few ever match the skills I have in this field. For those who strive for greatness, here are some of my tips.

1) The best chews are usually located in crates. Whenever one has the opportunity, one should inspect opened, unoccupied crates to see what the goods are. When it has been determined which crate contains the best of the lot make a point of it.

2) Anything, no matter what, is better when you shouldn't have it in the first place. With this in mind, wait for the perfect opportunity to get a chew out of a crate. An example of an ideal scenario would be when someone is in the general area but not looking directly at what one is about to do. This way one will be caught out of the corner of the opponent's eye at the triumphant moment--the moment when one zips from the kennel with such boastfulness as to convince anyone something of dubious nature must have just occurred.

3) If one refrains from showing off the captured prize to every soul in the area it either means not enough effort went into the maneuver or the obtained item was not worth it. This is a fail. See that it doesn't happen.

Note: It is of absolutely no significant value in there be multiple kennels to steal from. If one's own kennel is all that is available that is no excuse for slacking on completing the above tasks to the best of one's abilities. The only losers are those who do not try or do not try hard enough. I am always a winner--let that be an inspiration to you.

Something's Hatching at the Ranch

The light of my life, my sun, moon, and stars, and the thing that is even more interesting than cats (or at least sometimes more interesting than some cats) has arrived into the world. They came from the big white box (note: this is referred to by some as an incubator). Its been churning away at various noises for some time now, but nothing of interest as a general rule. A mechanical whir here and a few quick clicks there are nothing to perk one's ears at. But sometimes there are just the noises one would hope a big white box to make. If one could sit for a few hours in one's crate and think--and mind you that's prime thinking time--one could not come up with a sound more ideal to the situation. "Peep," it says, and also "cheep cheep cheep!" Only the day gets even better after this. At times like these one can open the door to find little fluffy snippets (note: also classified as Narragansett turkey chicks). Go ahead, open the door! 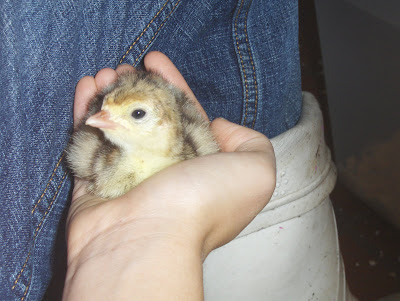 See, aren't they wonderful? I'm going to herd them when they get bigger. Right now we're getting used to one another and dreaming up all the wonderful stories that are to come.
Posted by Kirsten at 3:07 PM 4 comments:

There are some things they don't teach you in school. One such lesson was crawling about in the grass buzzing it's wings. By instinct alone one would just assume that God made all things that are yellow and black, fat and crunchy to be snapped up as snacks as happy as you like. Kirsten told me it was my prerogative if I really wanted to be messiny with a bee, but she didn't recommend it. Sometimes instinct does fail a body; the bee did not go down as I intended. After rolling my face in the grass for awhile I've come to some definate conclusions. Bees must serve some other purpose on earth besides live snack. Also, life is hard.
Posted by Anonymous at 1:29 PM 4 comments:

Mice, my friends! Mice are where it's at. By it I would specify all one would want on a lovely evening in the yard. Let me explain. There's the little rodent in the grass, all alive and interesting, and then--all sudden-like!--it pops over a few inches in any direction. You never know what direction until it happens. At the sight of this I can only say, "Mouse, will you be my friend? Please?" I do this in the doggiest way possible; the head is cocked, the front paws are outstretched, the playing face is set, and the tail awag. Kirsten doesn't think my new friend understands my intentions, but Mouse keeps popping about in that marvelous way of hers, so I'm not sure I care whether she recieves my message of good will or not. I offer this as another token of friendship: "Won't you please be my friend, Mouse? Oh, won't you?" 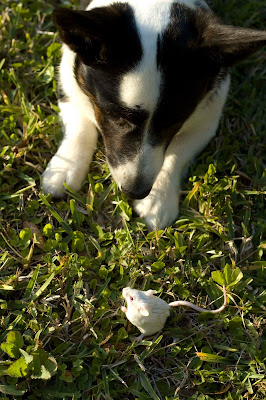 I don't claim to be an expert on the verbal or gesticular fine points of mousese, but it doesn't lie within my imagination for her to be saying anything other then, "Why certainly, dear Fern, how about a romp!" What wonderful creatures these are.

Note: No wee beasties were harmed in the making of this post. If it were not so I would not have told you. Thank you, also, to Mr. Jensen for the use of his photograph.
Posted by Anonymous at 5:39 PM 9 comments: